When I grow up I want to be a Movie Monster!

It's OCTOBER and that means time to buy more Horror Movies! And my good friend and Writer Director has quite and few titles out there for sale on his site CLICK HERE to buy the Flesh Eaters From Outer Space/Invasion For Flesh and Blood double feature DVD, Scarlet Moon, Haunted Hay Ride and Hate's Haunted Slay Ride.


Warren is the man that had given me my huge break in Flesh Eaters From Outer Space and Invasion For Flesh and Blood. And to get some more insight on what he had to go through in the early 90's with a crew of Metal Heads CLICK HERE to read it in his own words.

Then continue on here with my article below to see the once in a lifetime experiences I had.


Warren was the main person responsible for the whole film so he really had all the pressure hanging over his head and had to tow the line, while Shawn T. Reich and I were eighteen year old kids right out of high school that were getting to live the dream. Shawn and I were A+ students in "TV production" with a great teacher "Mr. Geller" so we at least had a working background with video shoots (Shawn might even have the first horror movie we made in class still). And we had made a dump load of commercials in class. And I had a basic F/X background from working at "The Costume Shop in Red Bank N.J."


I can't thank Warren enough for the huge chance and break he gave me. My uncle "Robert Gutowsky" had acted for Warren in "The Bloody Dead" and told him about me. 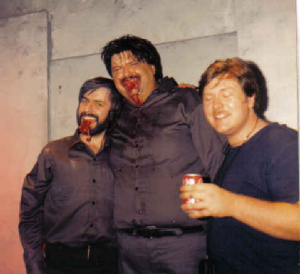 Warren had given him his card to give to me and a week later I was at Warren's door (My dad drove me) with a plastic skull made to look rotted (Right out of Marcia Lynn Cox "Makeup Monsters" book), a rubber hand I made with worms coming out of it and a big (Wow I'm going to be in movies!) grin. Warren was beyond cool and told me straight out that if I was going to work with him I would have to be serious about it and dedicated to seeing the project through. I was in and a week later I brought my friend Shawn T. Reich.


I think the main reason Warren had taken us in was he had seen his love of horror, Sci Fi and fantasy movies in us and that we had the talent and at least a working background with F/X and video production. So he had allot to work with and taught us how to focus our abilities and to do other projects we never thought we could. After a few weeks we had reached a point where he could give us projects unsupervised which freed him up to continue with the main things that needed to be constantly done.


The first project I was handed was the construction of the "Contractor Paper Cave" Warren Sr., Warren, Tony, Gene, and myself had made the chicken wire frame then began the long task of stapling the (Meat wrapping paper to it). The cave was built right in Warren's back yard and it was huge! The only down side was after any rain it would have to be repaired in area's which led to Warren naming me "The Cave Dweller" every other week I was handed the staple gun and a step ladder. Along with Warren (Using a Tarzan type voice and pointing in the direction of the cave) "Cave Dweller... Fix Cave..." Then I would plod down in daylight and come out at night time while Shawn helped Warren build props in the F/X lab. Then it was time for frozen burgers on the grill (This is the same grill we used to make F/X gel on). Yeah life was good.


Then there was my tour of duty in Sid "The Space Monster" Tony Annunziata and I would trade off being in it and boy did we have some adventures...

This was Tony's turn in the Sid outfit.

Like when I had to do a "Monster rising from the water" scene and I couldn't go under. The head of the suit floated like a cork so Tony had to cut holes in it (While I was wearing it!) we have pictures of it too. Or when Warren popped JAWS into the VCR the next day before I had to go into the water again. Did I mention that this was when the beaches were closed due to high bacteria? 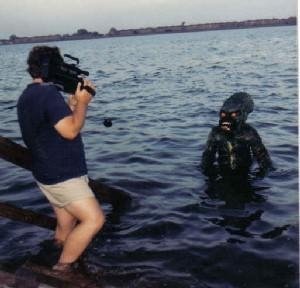 It didn't help much that this place is called Shark River either...


And Tony and I had a blast being in the "John Belushi" sceen, and "Desiree Russo/Sendelbach" had made these really bad bangs for me with the front half of a wig to make me look more the part of the halfwit to drive the gag home. It's funny because when I turned my head sideways you can see where the wig ended.


It was really cool where I was able to write scenes with Warren. And it was really amazing how he could make my crazed babbling and gag notes into a workable scene and would shoot it later.


Then there were the times (which was allot) where Shawn and me survived on nothing but "WAWA" hot dogs and iced tea for weeks. God bless the creators of that stuff. And big old Thank You to "June" Who pretty much lived behind the counter. And "Anthony" the keeper of the 50,000 mile (Shawn name) WAWA hot dogs". And who can forget the "Big Top Frozen Hamburgers"? Add in some day old rolls and you had lunch for the week. I felt bad for Tony because he didn't have the goat stomach like Warren, Shawn and me because the poor guy would be puking his guts up in the bushes moments after eating them. Maybe it was stress from film making or maybe because we used that grill to heat up F/X chemicals too...


And there were more than a few times where we laughed so hard our sides hurt while filming. "Like when Greg Scott was supposed to bring two friends from the gym to play henchmen". They didn't show so Shawn and me found two bouncers from "The Polo Club" to fill in last minute. They looked great, but didn't know how to stage fight so when they were hitting Greg they were pulling back, but you can still hear him getting the wind knocked out of him on the DVD. And the floor they slammed him down on was cement. Even though Warren was under crazed pressure and had to teach us allot as we went along he always kept it enjoyable and kept you wanting to see it through. I have to say working on "Flesh Eaters From Outer Space" and "Invasion for Flesh and Blood" were two of the best times in my life.


But there were also times where I was like "Why am I doing this again?" Like when F/X Artist "Cory Geryak" had done a chest cast on me with plaster and the Vaseline underneath evaporated. So Warren and Tony had to lift up the casting while Cory cut my imbedded chest hair with a "Exacto Knife" While Warren said "Remember you're making film history!". Then on the ride home we were pulled over and all the cop saw was two long hair guys (Warren was sleeping on the back seat) with a big bag of white powder (Alganate) and four huge syringes with rubber tubing (For spurting blood F/X) between us in a beat to hell "1969 Chevy Caprice". He told us (Tony and me) to get out (Even though I explained why we had the stuff) so he says "I'm going to search your vehicle." I had nothing to hide so I said "Go ahead." I'll never forget the look on the cop's face when Warren sat up (With a bad case of bed head) and said "You know what you're doing is illegal right?" The cop just walked over handed us our ID's and told us to get moving.


And another time when we had Tim Ferrante (From the early days of "Fangoria Magazine") in the movie. I was really excited because I love the magazine and Tim knows almost everyone in the business. Well Cory Geryak had made a full head cast of Tim and then made a full foam latex head (Which Warren still has) to use in a head crushing effect. Warren needed a live shot of Tim to match the effect shot so Tim had to stand in front of his cement chimney while Cory (Wearing part of the monster costume) had to slowly push his head back (It would be sped up later). Warren said "Action" and Cory didn't realize how close Tim was to the cement and all you could hear was *THUNK!* We were all dead quiet, then Cory started to tell Tim he was sorry. But Tim took it really well and started making light of it by saying "I'm never doing horror movie's again DISBROW!" And when we were finished shooting Tim was cool enough to give me a "Fangoria Magazine" out of his own collection and autographed it on one of his interviews with "Robert Englund" (Freddy Kruger) and if that wasn't enough he gave me a "Tranzor Z" otherwise known as "Mazinga" poster after we talked about favorite cartoons and movies. And I still have both to this day.


Or after writing Gary Hoffman's (Penile Displacement) scene with Warren and re sclupting the member from Warren's "Kiss of Medusa" then coming to Warren's house the next day. And seeing Desire'e Russo sitting on Warren's porch painting the star of the scene muttering "This is soooo f**king wrong..."


Did I mention all the make out scenes I got to do? Good times!


I can still remember him editing the movies and me keeping his spirits up with "Chicken-Fil-A" while he was cutting it (Me and Shawn were usualy behind him watching some B&W drive in horror movie.) Or taking him for trips to the mall or auction when the editing machines were in the repair shop just to keep him a little sane. Those times really sucked because it was such a drawn out process and any setback was rough and it wasn't like cutting film. Any change took forever to make and you were at the mercy of the machines so if they wanted to screw something up bad all you could do was watch and curse. But Warren got through it and the movie made it to your hands (You bought a copy right?)


Posted by TattooedSteve at 6:27 AM