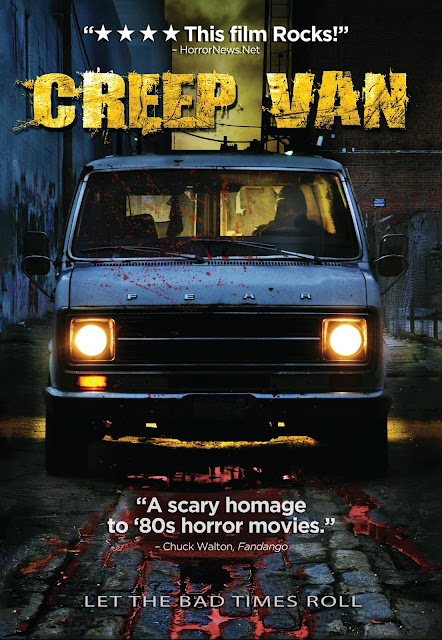 (2012) Written by Scott W. McKinlay and Jim Bartoo with additional material by Adam Jahnke and Ian Michaels.
Directed by Scott McKinlay.
This movie became a favorite of mine because it takes me back to a time when owning a crappy car and having a crappier job in my later teens was my normal day to day. And it makes no apologies in being what it is, and that is just a little less than an hour and a half brain break.

There's not much of a hard plot to follow "The Creep" (Mike Butler) drives around in his rolling chamber of horrors killing whoever comes along. And while that is going on a man by the name of "Campbell Jackson" (Brian Kolodziej) takes a job at a car wash falls in love with a girl named "Amy" that works there, and has to deal with coworkers he can't fit in with.

And soon his path crosses with The Creep when he sees a FOR SALE sign in the window The Creep's van as he takes the bus to work. He calls The Creeps number and after just getting his answering machine one time to many changes his mind about buying it. This sets off The Creep and has him setting his sites on Campbell and his love interest Amy. But all's not lost because Campbell has "Swami Ted" (Collin Bernsen) on his side. I'll let you find out who he is when you watch it, and all I'll say is Collin Bernsen is beyond funny in the role.

Lloyd Kaufman makes a cameo as a disgruntled customer at the Car Wash (Since he is the man that influenced a whole generation of these movies). And there is enough off the wall humor along with top notch gore to keep you happy.

I have to warn you that the movie is not for every horror fan out there, but it definitely delivers to those that get it.