I'll be the first to admit that I did a big old eye roll when I heard that Evil Dead was being remade again.

The first thought in my head was "Great another remake made to resemble one of those Teen Dramas on channel 11 (I'm looking right at you Chainsaw 3D). But then I had read that Sam Raimi and Bruce Campbell were involved in it. And that made me happy until I remembered "Spiderman 3", so I was in that "Great now I don't know if I should be happy or not" mode again...
Now my whole opinion on remakes is "If it's done well I have no problem with it". But then there's the arguments of what's done well or not, but I'm not getting into that. I'm just telling you where I stand on it.
So lots of fellow Horror Bloggers, Reviewers and Friends got to see it with Sneak Previews or on opening night. And everybody had opinions about it, but nobody said it straight up sucked. Which was a huge relief to me because I had to see it twice, due to time availabilities with my wife and my mom. My wife loves The Evil Dead Series so if it sucked I'd never hear the end of it from he. And my mother was in need of a horror movie fix since she refused to see Chainsaw 3D because Andrew Bryniarski wasn't going to be Leatherface in it.
And then my friend and professional actor Dan Carroll told me that Lou Taylor Pucci who played "Eric" was at the Rave Cinema in Hazlet promoting the movie with free T-Shirts and posters opening night. Which is really cool because Lou lives here in the Hazlet/Keansburg area and I love it when my locals get a big break. 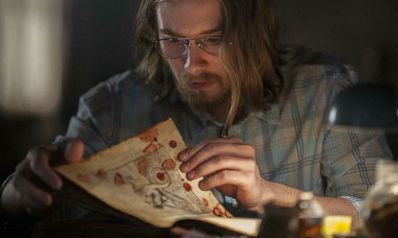 Now that the general opinion of it was being pretty good to great I felt better about seeing it again. Then Newt Wallen and Shawn D. Caple from "Underbelly" and the soon to be released "Midnight Show" had done a Underbelly Super Spoiler Evil Dead Review Episode.
Now you're saying "Why did you go see it if you already know what's going to happen?" Well my simple answer is "That's how I roll and I know that Newt and Shawn love EVIL DEAD as much as me so I figured that they could give me a heads up on weather to wait for streaming or not. And after watching the episode I was set.

Now without further yadda yadda here's my thoughts on

WARNING: NOTHING BUT SPOILERS!!!

I'll start with how I loved the way the movie took me right back to that cabin that I had first visited when I was fifteen years old, and reminded me of all the things that made me view movies differently.

The haunted attraction style lighting, the Sam Raimi inspired camera angles, the sounds of the creaking boards all brought me back and let me escape into the movie.

I haven't been this happy to see a horror movie in years, it was able to make me stop watching it as someone that did it to just being able to see it as a fan. And it's funny how you can react to certain movie injuries.
Like when Eric slipped on that slice of Olivia's face and landed on the toilet, I just about put my hand on my own back. And when Oiliva was stabbing Eric with the syringe, and then Eric pulling the broken off needle out from under his eye. I just about cringed so hard that my feet were almost on the movie seat!
But later when he was getting shot with the nail gun by Natalie and then taking a crowbar to the dome. I was like "Man he is getting housed"!

There were allot to nods to the originals without being too "Huh, huh?! Get it?!" But you could definitely hear them go "GOT YOU! YOU SOOO THOUGHT THAT WE WERE GOING RIGHT FOR THE CHAINSAW IN THE GARAGE DIDN'T YOU?!" Which was really funny.

And speaking of funny the dark humor was there but kept very subtle. Like everybody not getting the hint of a busted door and then a big old blood trail leading to the cellar door in the floor. And then Eric taking the time to open a book that was wrapped in plastic then bound in barbed wire (With the assistance of tools), and reads from it even though there were warnings written all through it!!! And of course seeing everybody's favorite "1973 Oldsmobile Delta 88" sitting in the back yard of the cabin.
My wife liked the movie allot, but she really missed having the amount dark humor of the original Evil Dead two and three.

My mother hasn't seen the originals yet, but she really liked this version and was even making Deadite jokes on the way home as we drove down a wooded road. And when I told her that Bruce Campbell is in the original three she want's me to bring them over to her place to watch them. I forgot that she really liked Bruce in "Jack of all trades" and "The Adventures of Brisco County Jr." So I can't wait to see her reaction to those.

Now as far as the gore goes, I think that it was great that they stuck with people having more blood coming out of them than the human body could possibly hold and it being borderline "Dawn of The Dead Red". Because for me it keeps me in the mode of I'm in The land of The EVIL DEAD and it's a complete vacation from realty. And I thought it was fantastic how everything was done with practical F/X. That was another thing that really gave me a happy visit back to 1985 when I had seen it for the first time on a $150.00 VHS tape played in a $800.00 VCR at a friends house.

I just can't wait to see how they're going to merge the multiverse's of Ash and Mia. And I'm sure it's going to be GROOVY!


Posted by TattooedSteve at 9:52 AM