Who Are The Warriors?! 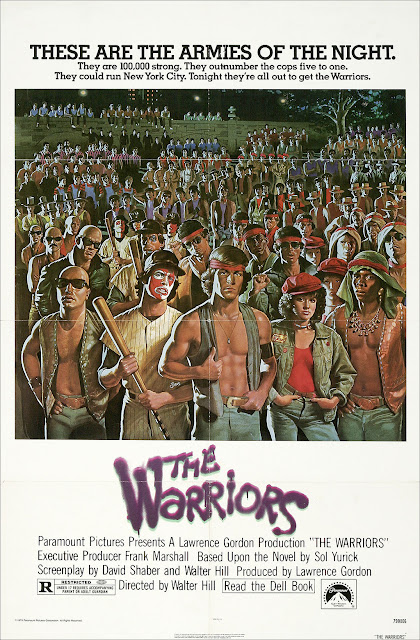 I know, I know "Horror site", but the actors of The Warriors appear at Horror conventions and I have yet to meet a Horror Fan yet my age or older that doesn't have this one in their collection. Besides that the movie has that great opening with the eerie music playing as The Wonder Wheel turns.

As the poster says the movie was directed by Walter Hill and is based on a novel "The Warriors" by Sol Yurick. If you enjoyed the movie as much as I did you should definitely read the book.

Sol Yuricks Book was loosely based on a Greek historical tale "Anabasis" by Xenophon. And one of Sol's "Dominator" characters is reading the "Classics Illustrated" comic book version while making the journey from The Bronx back to Coney Island.

While in the movie "The Warriors" fought their way back trough other gangs territories to make it back to their home by the Ocean like in Anabasis, The Dominators spent more time on the Subway and the book focused more on gang life and the members places in it.

I'll never forget when I saw the movie for the first time with my older cousin when I was nine years old. That opening sequence with the eerie music drew me right in and it became an all time favorite.

David Shaber and Walter Hill had taken The Warrior's and turned them from gang members to anti heroes that you cared about and wanted to see get back to Coney Island. 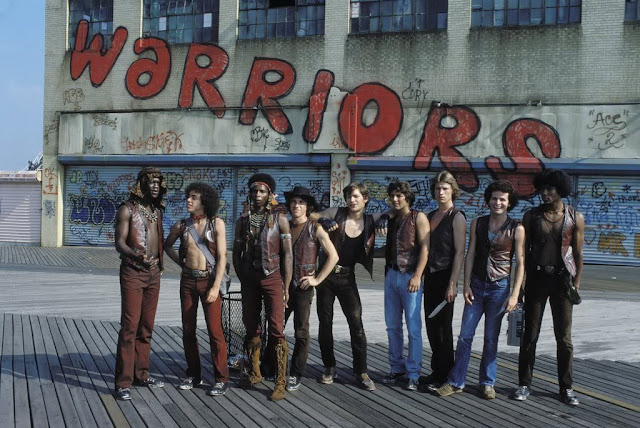 Then to keep the feel of it as a fight for survival and not a brutal gang violence movie they had introduced unrealistic gangs as threats. 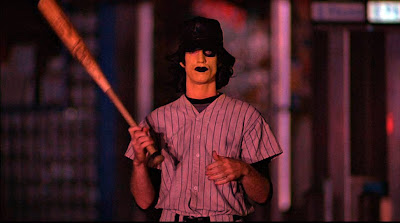 Even though they didn't fight The Warriors they added to the fantasy element and kept reality far away from the adventure.

A few years later I had seen it again on Television where it was edited for TV, but had extras that you can only get on the U.K. version now.

With this version it has Cleon (The War Chief) discussing going to Cyrus meeting in Van Cortlandt Park in The Bronx while sitting in front of The Warriors hangout. And you find out what each member is responsible for being picked as the eight out of one hundred and nineteen to go with Cleon.

Once it got heavy from Luther shooting Cyrus, blaming The Warriors and causing Cleon to be beaten to death by The Riffs. It became a real big problem for The Warriors. Not only did they have to avoid the police they had every gang within the territories of the twenty seven miles between The Bronx and Coney Island looking for them.

When I was growing up going through one town of people that didn't like where you were from was bad enough, but I couldn't even imagine going through that long of a hike like that!

Not only did the entire cast do a amazing job of making you like their characters or give you at least a dozen people to relate to, David Patrick Kelly completely owned as "Luther". 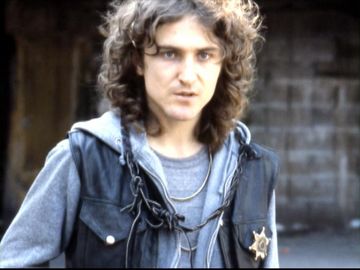 He was the antagonist that you loved to hate! He was that kid that hung out with the bigger kids and did nothing more than cause trouble. No matter how hard you tried you couldn't figure out someone liked that became a bully when (A) You could beat that kid down and (B) They hung out with guys that should be beating him up instead of taking orders from him.

And it seemed like "Luther" had an even bigger or at least more powerful contact than his gang "The Rouges". In the scenes where he checks in on the payphone you can't help but wonder who it is.
It could be just about anyone in some kind of position of power in the crime business.

It could be a city official that does not need an army of sixty thousand gang members committing crime. Or it could be someone from an organization that's not about to deal with a group cutting into profits from thier illegal operations. Or it could be someone with a hand in both. It looks like Luther was given a 70's police issue revolver and even if it were it could still be anyone from the above listed.

*Little Side Note* I was able to meet David Patrick Kelly through my then Karate Teacher Buddy Amato when I was sixteen. My teacher was auditioning for parts back then (The 80's Karate/Ninja craze I typed about before) and that's how he met and became friends with David who is a second degree black belt.
Buddy was offered a big role back then as a detective and got us parts as extras, but the script would have him cursing allot so he decided to decline on the role and we all understood.

So one day I stopped in the office of his original Dojo before getting ready to help teach a kids class and there was David sitting across from Buddy. I went all kinds of fanboy and yammered about how much I loved him as Luther and as the villain in "Dreamscape". And he was amazingly nice and thanked me for the compliment. I would kill for Doc Brown and his Delorean right now so I could get a picture with my webphone!

*Back to the article*

Now on top of all that fun you have to add on the fact that most of the gang has absolutely no idea where they are at. You don't know if any of The Warriors members have ever really ventured outside of Coney island before this.
If you say "How can you live there and not go anywhere else?" I know people that would get lost four towns away from where they they live. I'm not making fun I'm just saying that they feel everything they need is right where they are. And unless it's someplace on the main Highways they have no need to go into those other towns.
Add to that all of the parks, backstreets and alleyways I'm amazed that they were able to meet up!

Then there was the addition of Mercy 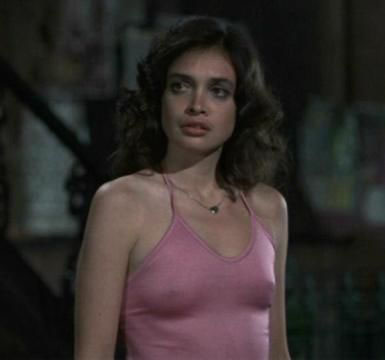 Deborah Van Valkenburgh added so much as the character of "Mercy". At first you hated her as the antagonist bigmouth that had to start trouble between the Orphans and The Warriors. Then she turned into an annoying tag along and finally someone you cared about and wanted to see get safely to Coney too. When she talked about how she escapes the realities of her neighborhood in the arms of others before she gets old it really changed your feelings towards her. Because it turns out you knew a girl like her.

Which brings me to "The Orphans" 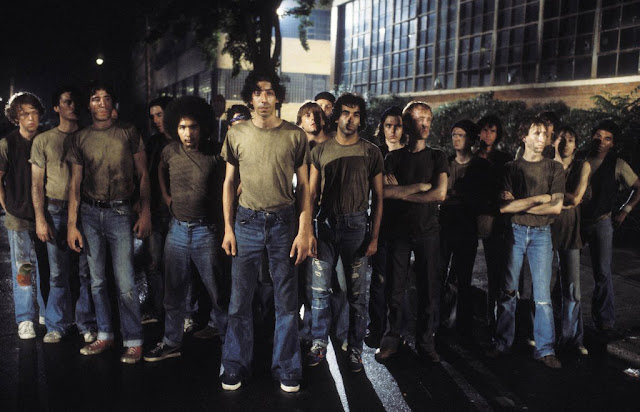 Allot of my friends considered a joke as a gang and even Swan had something to say. But if you think about it they could have been one of the biggest problems for The Warriors with the situation they were in. They were angry, they were on home turf, they were packed and they had nothing to loose.
I knew a couple of families like them where they didn't have much, but they fiercely protected each other and I respected that. There were others that made fun of them while with a couple of friends or picked on one or two brothers while they were alone. But they were beyond sorry when they made the mistake of walking past the families house when all of the brothers were home later. Hell some even had sisters that delivered the beat downs too.

After making their way all the back to Coney with the loss of Cleon, Fox and arrest of Ajax, Swan seems to decide he wants to get out of Coney and see more of what's out there with Mercy.

Another part that's discussed allot with my friends is the ending where Masai and The Riffs are told Luther was the shooter. And then the final showdown between The Warriors and The Rouges.

I always hear "How did Swan not get Shot?!" Well Luther doesn't look like the type that visits the firing range. And Swan has to have had enough street fighting ability to not only be chosen to be second in command, but make Ajax rethink his challenge. 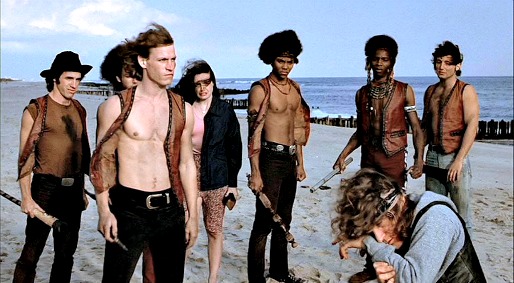 So this had given him the edge, but yeah I can't figure out how the others didn't get shot standing behind him either? So I just that one slide and am just happy with the fact that The Warriors were cleared and Luther and The Rouges got theirs.

Then The Warriors walk off into the sunset...
In 2005 Rockstar Games made
The Warriors Video Game 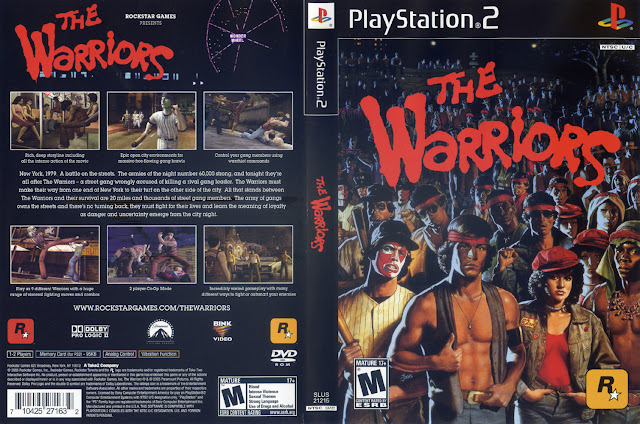 The game takes place three months before the Cyrus meeting, and then drops you right into the fight back to Coney after Cyrus has been shot. You run from The Turnbull A.C.'s gang bus, fight The Baseball Furies and just about every gang featured in the movie that had screen time.

And there's flashback levels where you get to see the formation of "The Warriors" when Cleon and Vermin were ex-members of another (fictional) gang called "The Destroyers". When they had recruted enough members they had taken half of the Coney Turf and then you get to be part of the battle when they claim all of it. 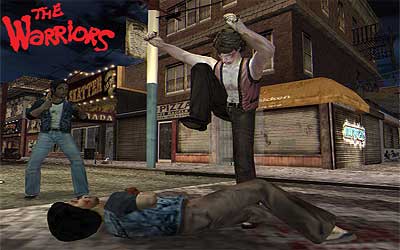 Here's Swan bringing the pain to two Destroyers for tagging in Warriors turf.

You get to see how Swan, Ajax, Cochise and Rembrandt became members. And you get to go on a Scout mission as Fox.
The game brings The Warriors back from being complete anti heroes to being a full on gang. You go on patrol spray paint over rival gang tags and marking your own territory with The Warriors tag. 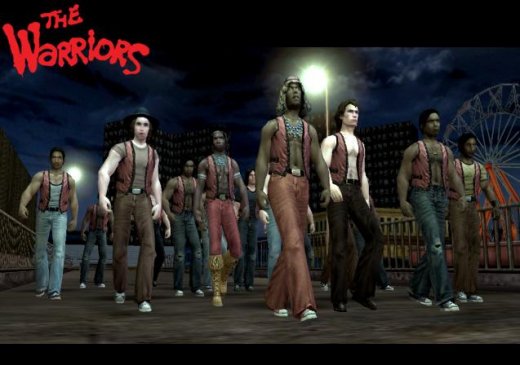 Then the gang needs money to pay for spray paint to tag and buy drugs (to recover from injuries) so the members have to steal car stereos, extort local businesses, mug people, pick the locks on handcuffs when your fellow gang members get busted and do smash and grabs after picking the door locks. Yup, the anti hero persona ends there. 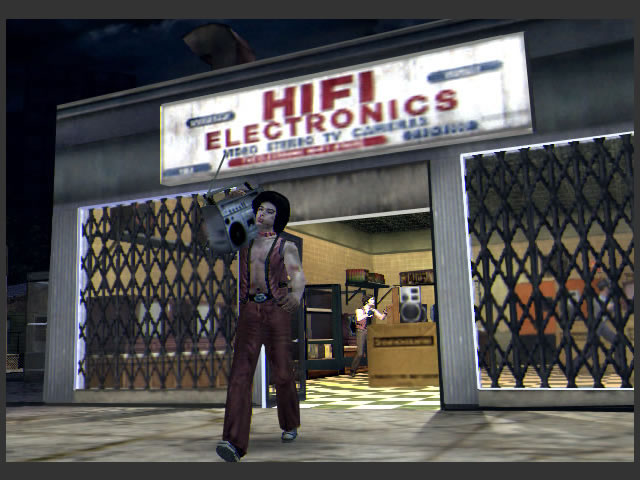 Then there's rumble modes where you can fight any gang you want including groups of cops. Survival mode where you fight the gang of your choice as long as you can.

And if that weren't enough there's a hidden
Double Dragon Style Game called "Armies of The Night". 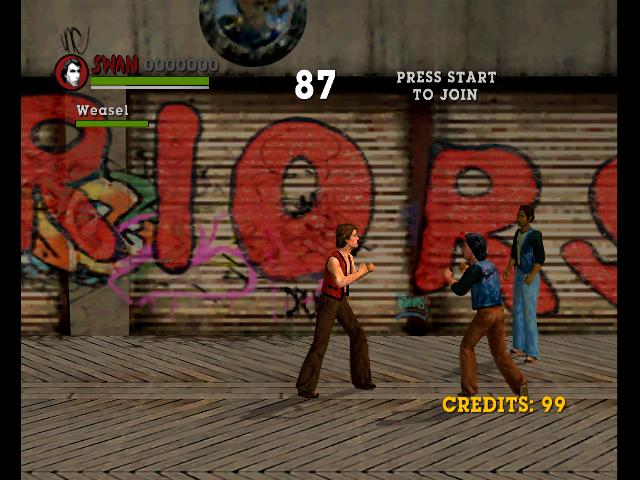