My thoughts on Texas Chainsaw 3D.

I just got home from seeing "Texas Chainsaw" in 3D 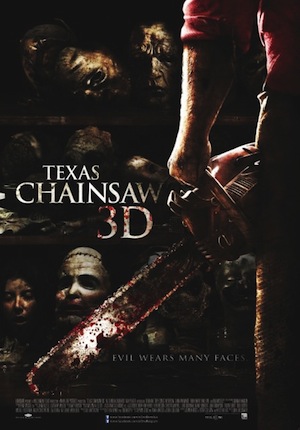 I don't want to say it was the worst TCM movie I've ever seen because we can all agree on which one that was.
But it wasn't anything like the ones that we all enjoy.

WARNING!!!
THIS ONE IS FULL OF SPOILERS ALL THE WAY THROUGH.

I don't know if I missed something but it's like they were trying to make everybody happy at once or give nods to different movies or maybe just trying to keep everything familiar.

From the beginning through most of the way it was almost like a Rob Zombie Movie without Rob Zombie directing it or adding his artistic influences. Even the beginning was straight out of "Devils Rejects".

After that it was definitely written for the Facebook - Reality Show generation. The web phone video feed scene and Leatherface sewing his mask to his face (Body Modification) said it all right there...
The 3D didn't add anything at all and I'll be glad when the fad finally fades out again.

I thought the cameos by Gunnar Hansen and Bill Moseley were cool, but the whole changeover from the original Chainsaw threw me off. Like the obvious "It's supposed to be a sequel from 1974", but that's a 39 year difference. Even if it took place in the early 80's there were no webphones yet and that's not even counting the whole NEW family lineup. So is this an alternate universe sequel?

Man this review is getting as all over the place as Texas Chainsaw 3D...

Then the whole Carnival Scene was a complete letdown even with the "SAW" dig. And there were so many questions like "Why isn't the Sheriff arresting them?" or "Why didn't Leatherface put a hurting on Heather? I mean this is the 74' Leatherface who killed anyone that came in the house, not the 86' Leatherface looking for love.

And I really wasn't feeling the new Leatherface or his mask. Dan Yeager just didn't make Leatherface his own like Gunnar Hansen, R.A. Mihailoff, and Andrew Bryniarski did when they wore the mask. I don't know why, but he just didn't click with me as the character. Maybe the director was saying "Don't do it this way or don't do it that way" the whole time and it kept him from really bringing his version through.

The funny thing is even through all that I still found it watchable. I could have waited for Netflix, but with all of the buzz on the good old Internet here I had to check it out. And a man by the name of Gregory that makes the trip out here to see what's going on wanted to know what I thought of it.

I have to admit I liked the sense of family it had with Heather taking on the role of caregiver of Jud, maybe because I do it myself. And the payoff with the meat freezer jump (going back to 74') made me giggle. And the after credits scene had a Married with Children feel to it.

I just can't see a sequel coming from it though...


My friend "Derek Huey" at NerdRemix.com and I had a FB conversation about TCM 3D. It doesn't look like I was saying allot, but Derek was going from my review which explains why my responses were one sentence.

If you're reading this at a way later date Derek's review will be "Friday, February 22nd, 2013" on the site.

And make sure to stop by there and see their goings on too. Derek owns the site with (Scream King) "Thomas Gleba" (writer - director of "Zombitch") and they have features like "Horror Hottie of The Month", podcast, reviews, interviews and "The League of Science" episodes.
Posted by TattooedSteve at 7:32 PM