In memory of The Filkin's Halloween Castle...

I want to start this by dedicating this article to my Aunt Vera (R.I.P.) who was a second mother to me and did so much for me along with my own mother.

And to Mr. and Mrs. Filkin who have passed long ago but were responsible for some of the best Halloween memories I have ever had.

Then I want to thank The Keansburg and Union Beach Police, Volunteer Fire Fighters, Volunteer First Aid, Animal Control (Trying to help as many misplaced and stray animals as possible) and Local Business owners for doing everything they could and are to help the residents of both towns.

I also want to thank the Volunteers that selflessly help in any and every way they have and are (With people and Animals). All of you are ROCK STAR!

And of course a huge thank you to the Tree Cutters, JCP&L Linemen, The Alabama Power Linemen (For driving from states away to restore the power here), NJNG Technicians, Cablevision Contractors, Richie and John for keeping it together and looking after everyone in my mom's building, The Coast Guard Memebers, The National Guard Soldiers and Governor Chris Christie (For putting his politics aside and being there for everyone in need on the Jersey Bay and Shore).

And a huge shout out to all of my fellow "CLERKS"
that were manning the counters through it all!!!

I hate Hurricane Sandy (Frankenstorm)!!! It arrived destroyed and killed without any hope of letting up. I know it tore through so many areas and states but in this article I'm talking about my two home towns of Union Beach and Keansburg, New Jersey. And I can't wait for the day when all of my family and friends in both towns can walk past the new homes along the bulkhead in Union Beach and down the rebuilt Keansburg Boardwalk and say "Remember that storm back in 2012?" And instead of remembering the wreckage and loss, they'll remember how everyone came together and got through it.

In late September in 2012 my friend Justin Hamelin had asked me and a few others to type articles about our favorite Halloween memories for his website MANGLED MATTERS. Then he posted them through the month of October leading up to Halloween.

Now for me typing this one up was easy because it was my first real Halloween. I had a cool costume and my Aunt Vera along with my Mother had my whole day planned out. My Dad was there, but he worked long hours and left the festivities to my Aunt Vera and my Mom.

Read on below and see how that day went...

From the time I was five years old Halloween has to be my favorite holiday ever. I get to dress up as whatever I want, hang body parts and skeletons all over the place, watch horror movies all day, buy monster cereals and lots of monster mask! Okay, so I do that every day anyway... but I don't get weird looks when I do it in October.
I know other kids are all about Christmas, but my birthday is ten days before it and report cards always came the day before Christmas Vacation... So Halloween became my number one real fast.
When I was four years old the first Halloween costume I ever picked was a skeleton. This sounds cool and all but the thing is it freaked me out so bad out of the package I wouldn't wear it. So I wound up sitting that Halloween out.
But when I was five that's when I got to start a tradition that lasted for five years and gave me some of the best Halloween memories ever.
Now that lousy December birthday I told you about earlier actually worked to my advantage because of me not being five by sign up I didn't start  school until I was six.  And this gave me the chance to really celebrate my first full day of Halloween.
My mother worked from six to two in the afternoon during the week so my Aunt Vera would watch after me those days. And once a month Aunt Vera would visit her mother at the nursing home.  This was also when I got my Famous Monsters magazines and Horror Comics from the paper store nearby. The people there were really cool and I could never get enough of hearing all of the cool war stories and how it was growing up back when they were kids and they totally rocked Halloween! Even if it was just them getting a simple costume made of pieces they were happy to be celebrating it.
So my Aunt Vera thought it would be fun to go in costume to visit her mom. She was a Halloween Witch and I was one of the Soldier Gorillas from Planet of The Apes. 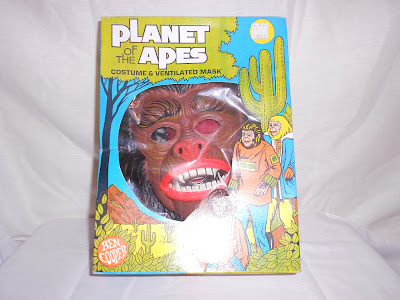 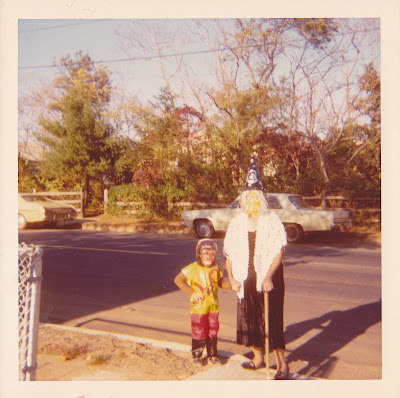 When we got there everybody loved it and we were complete rockstar!  The Nurses asked my Aunt Vera if we could stop by a few rooms she said yes, and it was so cool seeing everybody light up as we wished them a Happy Halloween. 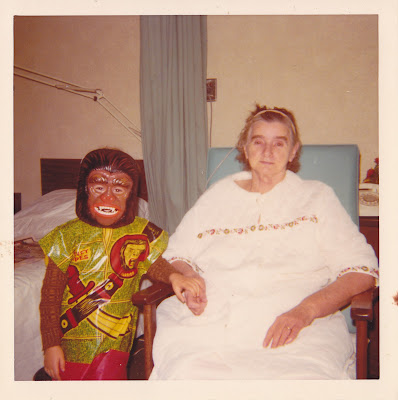 After that we got the bus back home, met up with my cousin Ellen and she drove us to The Old Wagon Wheel Farm. It was an apple orchard and every October they would have hot and cold cider, hot chocolate, story time, "Mr. George" playing the piano, a petting zoo and the "Pumpkin Family". The Pumpkin Family were Scarecrows propped up in chairs with pumpkins for heads, and a few ladies behind the backdrop that you couldn't see would do the voices for them on a P.A. system. But it was the coolest thing ever three years straight!!!
After that it was back to town to visit The Filkin's Halloween Castle".  Mr. and Mrs. Filkin were a really nice older couple that knew most of the kids in town didn't have much and would have the ultimate trick or treat along the front walkway of their house. 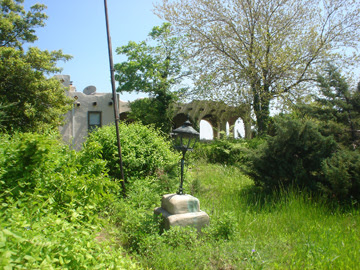 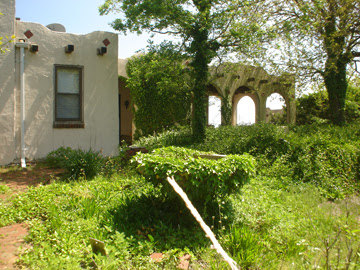 "The yard isn't normally this overgrown it's been empty for a few years and in between owners."

You would get on line going up to their house then you would walk past tables with all kinds of boxes cool dime store Halloween Toys and get one of each. Then at the end of the tables you would get a goodie bag of candy and a cup of cider. 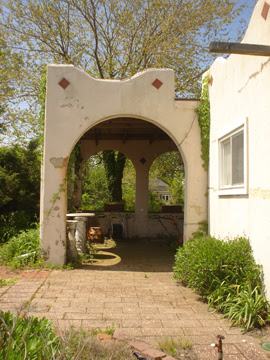 The house was a adobe style, but to us kids it was a castle on the bay. The Filkin's have passed away years ago and the home has gone through a few owners, but it's still there putting a smile on my face every October when I drive by it.
Then to top the whole day off my mother had taken me Trick - or - Treating after work all over town. Now the town is only a mile by a mile, but when your five it was like walking all over the entire state of New Jersey. Even though I had a pillowcase three quarters of the way full of candy I was pretty much done with Trick - or Treating. And the main reason for that is I'm not much of a candy eater.
When I turned six Halloween was a Sunday because of Leap Year, but we still went to The Old Wagon Wheel Farm and The Filkin's Halloween Castle. And my Mom and my Aunt Vera had come up with a "Halloween Presents" for me since I couldn't be bothered with Trick - or - Treating. Nothing huge just a couple monster toys of some kind. And this was the year where all kinds of Halloween Specials on TV were becoming regular.
There were always "It's The Great Pumpkin Charlie Brown" and "Mad Monster Party"  since the 1960's. But in 1976 Paul Lynde had a Halloween special with KISS, The Wicked Witch of The West and Witchepoo from H.R. Puff n Stuff.  Then there were all the cartoons and television shows doing Halloween Specials and episodes all October.

And Halloween memories just got better from there, like the time my Wife (Then girlfriend at the time) dressed as a Playboy Bunny for Halloween and we went to five Backyard Haunts in one night. 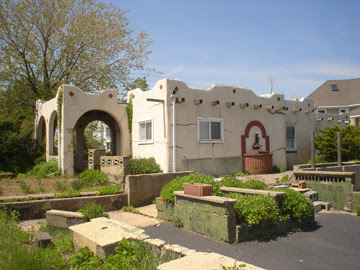 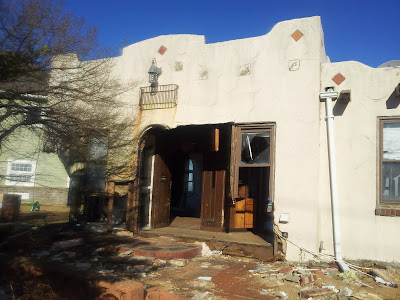 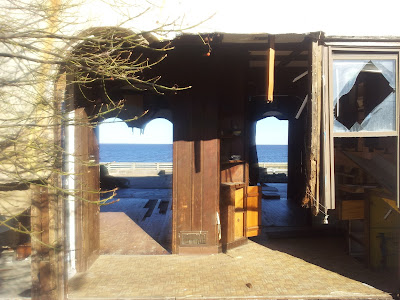 This was the front entrance 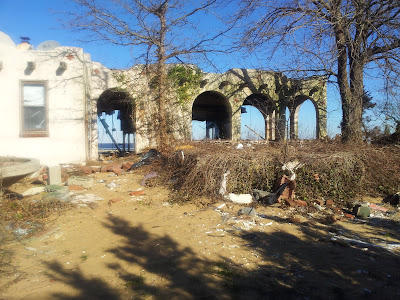 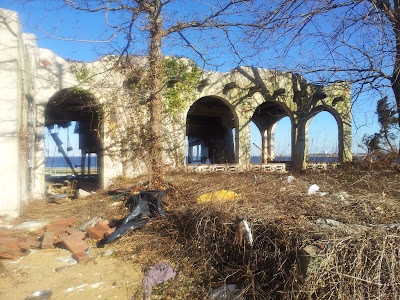 This is the walkway where the Halloween festivities took place. 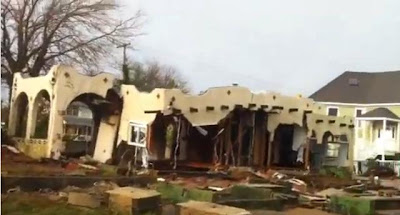 The back yard of the Halloween castle. 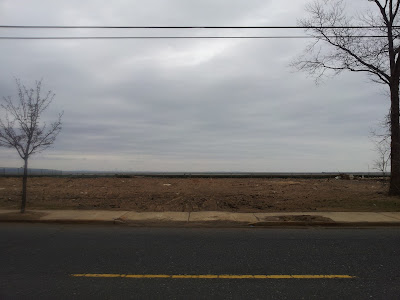 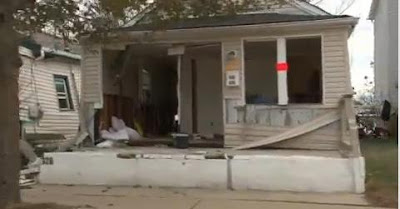 Aunt Vera's House across the street from The Halloween Castle
after Hurricane Sandy October 31, 2012 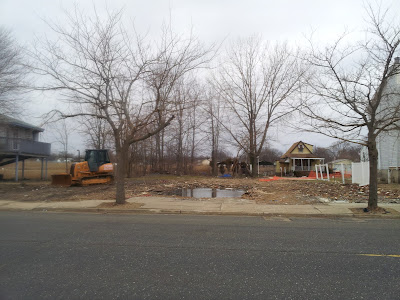 Posted by TattooedSteve at 11:17 PM