I thought it would be fun to post some writings about the old days when making horror movies, managing a costume shop, body puppet acting and managing a haunt were my daily routine.

I had some great times and I thought it would be fun to share the memories. The first one I'll start off with was when my friend Bennett "Mr. B" grabbed the wrong container from his Pyrotechnics kit. 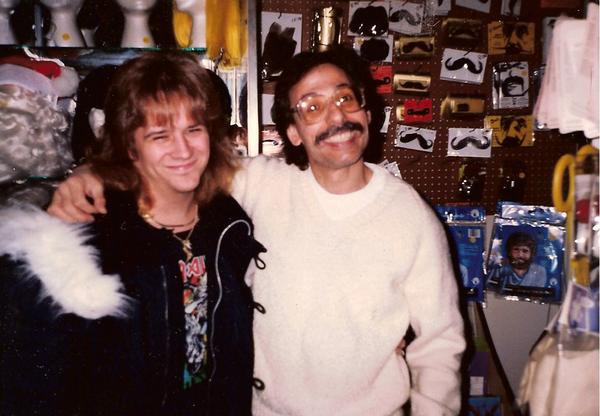 Back in the old Days of The Costume Shop when it was in it's third home The Red Bank Mini Mall Bennett made a big bang.

A customer had come in for some pyros while I was getting a costume rental ready for another customer.

So Bennett came out and started to help the customer and had taken some flash powder out of storage with a blast plate. So he went out the front door of the store with his supplies to give the customer a sample in the main part of the mall.

Well instead of flash powder it was bang powder that's supposed to be used in small amounts in a tube. He hits the igniter and all I heard was "WAHBOOM"! Followed by a huge plume of smoke floating past the door. The lady I was getting the rental ready for almost had a frigging heart attack and I nearly died of a laughing fit.

The lady looks at me and yells "How could you think that was funny?!" I said "You should have seen the time we tried Zel Gel in the stores old location. I think it took three coats of primer to cover the scorch mark on the ceiling when we almost burned my hand off."

Years ago in the Broad Street home of "The Costume Shop" Bennett and me had ordered a jar of Zel Gel. Now for those of you not in the know Zel Gel is a gel that stunt people use in fire stunts to keep from getting burned.

We went halves on it and it was still crazy money for it even back then. So when we tried it we used as little on my hand as we thought we could get away with. We didn't know that you had to use almost the whole jar to get any real protection.

And there I was in the old office/workshop and Bennett squirts a crazy ammount of lighter fluid on my Zel Geled hand (Because Lighter Fluid is cheap we used allot of that). He lights it up and the flames hit the ceiling and for about five seconds it looked really cool till it almost comepletly fried my hand.

Posted by TattooedSteve at 10:14 PM