Happy Goldsplatt is back from the dead! Or is that undead?

Well James F. Murray Jr. and Nicholas Pawlow have returned with yet another collection of those Moldy Horror Grind House Oldies that we love. And introduced much of us that spent our wonder years in the Horror section of the Mom and Pop Video Store with a copy of Fangoria firmly in hand as a check list to all of the gore we could stand.


And this one is called "Celluloid Bloodbath: More Prevues From Hell". (2012) 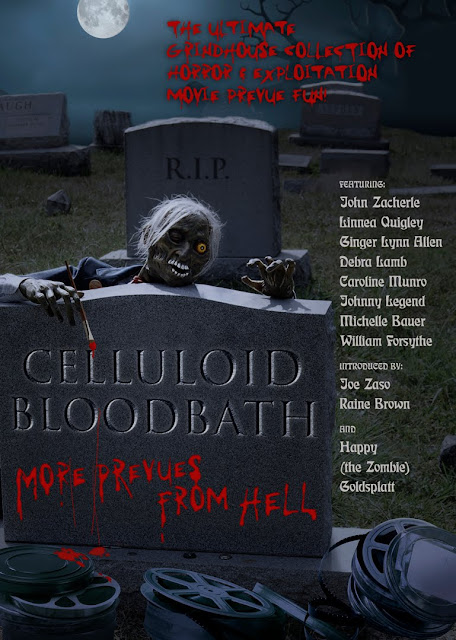 This time the guys have brought the Horror Convention to the comfort of your own home. By having a who's who list of Horror Celebs of every type talk about their experiences and do intros to some of the trailers and their categories. Even some of the classic theaters that these Grind House Horrors called home got some respectful screen time. As well as a visit to Jesse Hess's table in honor of his father David Hess.

Then it was wild to see one of my favorite actors William Forsythe talk about how he's not much of a horror fan, but more of a fan of thrillers and how a phone call from Rob Zombie had convinced him to take the role of "Sheriff Wydell". And how this role had made him relevant and known to a whole new generation of fans in a genre he wasn't part of before.

It's funny how it's said that allot of the trailers were actually better than the movie as a whole (Which is pretty true most of the time). Don't get me wrong, you know I have a undying love for Cinematic Cheese but getting the best of it in a couple minutes instead of ninety is never a bad thing. And the category of "Really Bad Trailers" is worth the watch alone! "Red Riding Hood and The Monsters" even had me shaking my head.
But just about all of the movies on there are such a huge part of when I was growing up. I still remember the days when I had twelve Mom and Pop video store membership cards in my wallet. And I would be at friends houses sitting through hours of VHS tapes trying to find the next random horror gorefest to top the last.

The movie and it's collection was definitely made with love and is a thank you to all of us Horror Nerds that still message them about still enjoying Prevues From Hell to this day.
Posted by TattooedSteve at 8:38 PM