Paying a visit to Nightmare Alley!

As I go through the racks of "The DVD's With Extra Cheese" at The Abandoned Mom and Pop Video Store, I was reminded of a favorite by a Thomas Gleba video review at "Nerdmix.com" by the name of Nightmare Alley (2010) 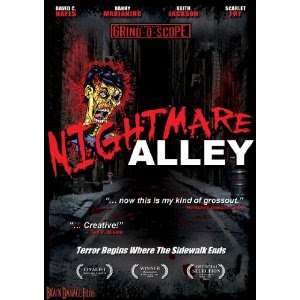 This was written by Scarlet Fry and Laurence Holloway with Laurence as director and Scarlet as co - director. And it is just a (fake) blood soaked joyride the whole time. On top of that it embodies "Cheesy Movie" in every sense. If you clicked on the link and read my definition of a cheesy movie you'll understand what I mean.

If you grew up loving TROMA movies like myself Nightmare Alley could be considered one of it's offspring. Scarlet and Laurence are two guys that decided to do what Uncle Lloyd always says and made their own damn movie. They had access to a Costume Shop/ Party Store (Bubbles of Joy), musicians, artist and friends to act in the movie. I would have done the same thing in the days when I managed "The Costume Shop in New" Jersey, but the editing programs were beyond expensive and even internet distribution would have been a nightmare itself...

So I give the guys credit for working with what they have, putting together seven stories and getting distribution through "Brain Damage Films".

It's a collection of seven separate stories with a ghouly host played by "Scarlet Fry". 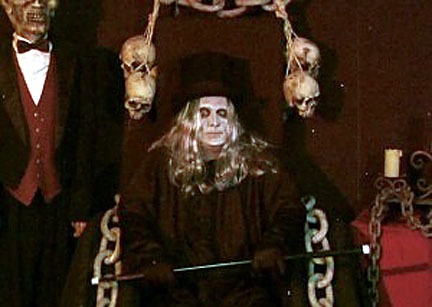 The first story is a "Fist Full of Innards" where the Wild West becomes a bit more wild.

The second is "Rebellion" where a large plastic rat gets himself a driver and goes on a joy ride.

The third is "Death Chat" which is a tale of online dating gone wrong.

The fourth is "Meat" and it's what's for dinner.

The fifth is "Closet Case" which reminds me of an old Bobcat Goldthwait joke.

The sixth is "The Great Damone" which reminds you to be careful about saying you want to be part of an art piece.

And finishes up with "Slash of the blade" where "Jack" is back.

Now like I said the movie is all about entertainment and not some thought provoking life changer. It's just a flat out brain brake for an hour and a half. There's allot of laughs to be had and the guys definitely made it to do something they've always wanted to.

Now for myself I think that another reason it's a favorite is I was in Arizona six years before the movie was made and paid a visit to "Bubbles of Joy" in Mesa, Arizona. We were there visiting my wife's sister and I had bought a steer skull at an outdoor market.
Well this thing was huge and I couldn't carry it on a plane and I wasn't trusting the airlines to take care of it after I had them almost ruin a rattle snake hatband of mine, so I decided to mail it home.

I was going through the phone book and found a listing for a Post Office Shipping Center that was located in a Costume Shop/Party Store called "Bubbles of Joy". And one thing I found really interesting about the store was it was the only one listed. I was used to being in "The Costume Shop" in New Jersey where our ad was surrounded by hundreds of other Party Stores, Costume Shops and Entertainment companies now facing a fight against Halloween Seasonal stores.

So my wife and I thought it would be a good idea to ask them at the store how the market was there. And when we got there the staff were beyond nice. They were blown away to hear how fierce the competition is in New Jersey and how it was getting harder and harder to compete with the seasonal stores and the distributors selling to anyone and everyone.

"What the hell does this have to do with the movie?!" you ask? Well the thing is I try to tie in movies I review with parts of my personal history. And when I saw "Nightmare Alley" in 2010 I almost fell over when I recognized not only the alley, but almost every location they filmed at. Then I really laughed my ass off when I saw "Bubbles of Joy" on the screen. And it was almost like getting to visit there again.
Posted by TattooedSteve at 1:23 AM