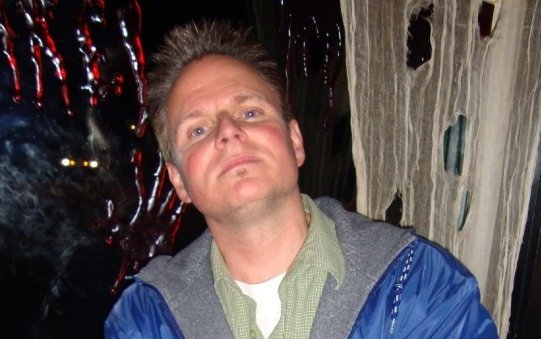 Thomas Berdinski not only makes great "Leave reality and aggravation at the door, grab a snack and just enjoy the ride movies". He is beyond personable and truly thankful for any support his movies receive. 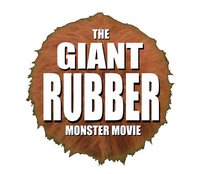 This movie is a huge love letter to all of those... well giant rubber monster movies that we grew up with as a kid. Movies that had King Kong fighting with Godzilla or Gamera fighting Guiron or one of my all time favorites "War of the Gargantuas" where they were fighting not even ten minutes in. 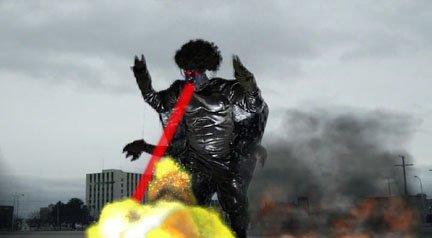 and kicking the crap out of each other.

And how can I forget the must have of must haves which is jet fighters and tanks getting wrecked! 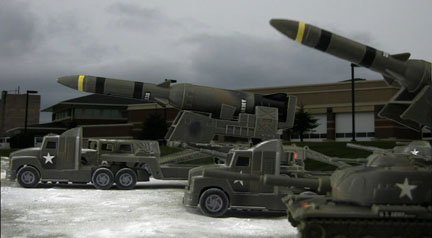 The cast is a great collection of some of the most known names in Horror Hosting like Roxy Tyler, Sigmund Zoid, Robyn Graves,  Count and Countess Gregula and Marlena Midnight. And included cameo appearances by Dr. Gangrene and Count Gore De Vol.
And allot of the non Horror Host cast members are featured in his other films like The Italian Zombie Movie Parts One and Two and Noirmageddon - A Mark Anvil Thriller.

The plot itself is a tribute to all of those monstrous favorites too! I'm not saying that Thomas copied anything because that would mean it would have had a recent theater release while backed by a Corporate studio.
But I am saying he has threads running through his plot that make you laugh because you remember those old movies, and makes you dig through your own collection to watch them again.

Now onto The Italian Zombie Movie Parts One and Two 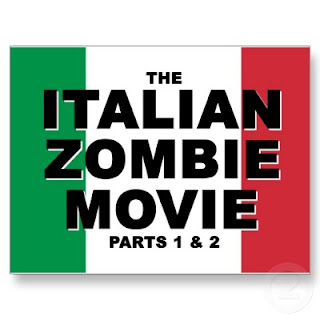 You don't have to be a walking IMDB to enjoy these, but it does add to the enjoyment. He takes you back to another great time in our lives when we were in our early teens and channel surfing this new thing called Cable Television. And going through the shelves of the horror sections of Mom and Pop Video Stores.

Thomas also remembers all of those nights watching ZOMBI 2, Shockwaves,  Dawn and Day of the Dead, those strange alien horror movies from England and Lucha Libre Wrestlers fighting Mummies or Robots. And wrote a script celebrating all of them.

He doesn't try to over explain the movies or make any apologies whatsoever. He just writes and directs movies that he knows people would have much fun watching as he did making them.

Another one of the things that really draws me to his movies is I too acted in a couple Indie Horrors myself and know how hard it is to work on them. It's a labor of love, but it is allot of hours getting as much done as you can in the short amount of time you have. You have to work around friends work schedules so they can be in it, and be able to work in front of and behind the camera at any given time.

I had a crash course in learning how to do allot of jobs on set with Warren F. Disbrow's movies. One minute I'm walking through the New Jersey woods in a rubber alien sea monster costume, the next I'm setting up lights and running a fog machine (while still wearing half the costume). And that was to do another walk through. 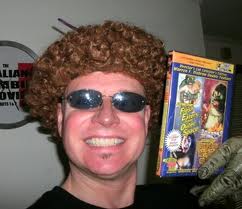 Then there's the job of securing friends houses to film interior scenes, being the costumer and F/X artist, script fixer (In case of needed scene changes), set builder and prop master.
It's allot to do, but if you have friends that love making them as much as you it makes it all worth it.

By now you're saying "So where can I find these to buy,
watch, love and have buried with me like a Mummies Treasure?!"

Well wonder no longer because here are the Facebooks for all of them.

The Cult of Moi and Vous Film Producioni Company LLC.

The Italian Zombie Movie Parts One and Two

And see him as "The Shape" in The League of Science

and catch his trailer "House with a Mourge"
on the soon to be released DVD "Midnight Show"
by Newt Wallen of Underbelly and The League of Science.

Posted by TattooedSteve at 9:42 PM