Watching some Prevues From Hell! 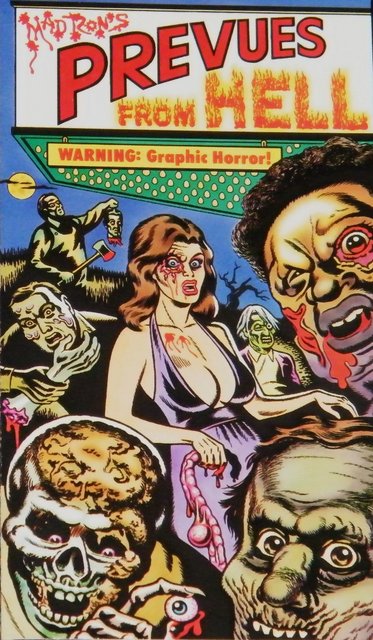 Back in 1988 Tim Ferrante (Yup, the guy that wrote for Fangoria Magazine in the 80's) gave me the gift of Mad Rons Prevues From HELL on VHS. "How the hell did that happen?!" you ask, well I'll tell you.

That was me in the monster outfit with Writer/Director Warren F. Disbrow on camera.

Warren had filmed allot of sequences for Tim Ferrante's documentary "Drive In Madness" and kept in touch with him allot. Tim even did a cameo in "Flesh Eaters From Outer Space", and would give us all kinds of cool VHS tapes to watch. Well one day he had given us brand new copies of Mad Rons Prevues From Hell.

Warren opened his and we watched it that day.

We loved the collection of late 60's and early70's Drive In horror trailers, the zombies and the interactions of Nick Powlow and his friend Happy Goldsplatt. 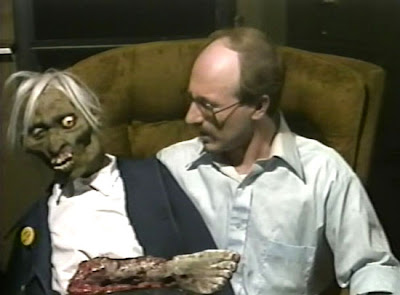 The running plot of Mad Rons Prevues From Hell is Nick, Happy and Mad Ron had become trapped in a possessed movie theater during a zombie invasion. But they lucked out where the zombies are distracted by and enjoy Mad Rons collection of Horror Trailers. 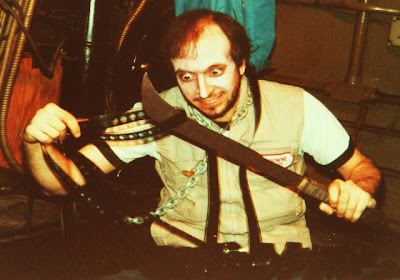 Keep em' running Mad Ron there's nobody else to eat!

And there is a ton of great trailers to keep you entertained as well. Like "The Corpse Grinders", "I Drink Your Blood" and "I Eat Your Skin", "The Undertaker and His Pals" (One of my all time favorites) and "The Texas Chain Saw Massacre". 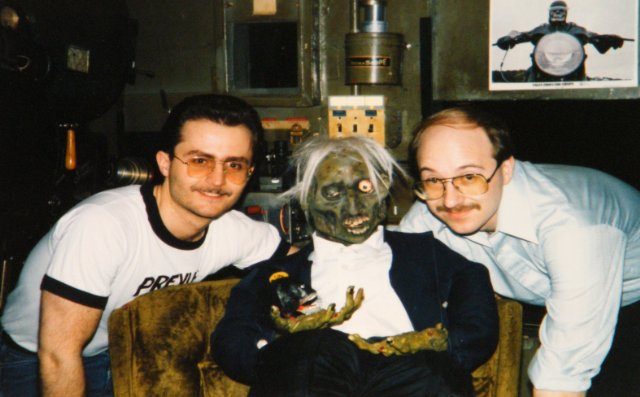 And just when you think it's over, the zombies overrun the the projector room. Nick and Happy make their escape but run into a Video Pirate already dubbing off "Prevues From Hell" copies. This doesn't sit too well with Happy and he takes care of the Video Pirate with his own brand of Zombie Justice!

I never get tired of watching this one I literally watched my VHS tape until it broke. And twenty years later I still watch it on Netflix.

A couple months ago Nick Powlow had James Murray get in touch with me on the phone and I was beyond excited to find out that they are currently working on "Celluloid Bloodbath: More Prevues From Hell". 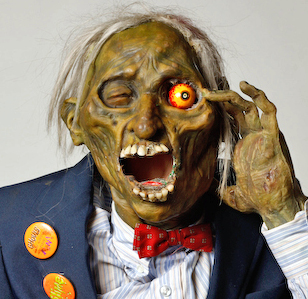 That's Right Happy, Well be keeping an eye out for you!


Posted by TattooedSteve at 9:05 PM