I decided to take a break and hang out in
The Abandoned Mom and Pop Video Store for a few. 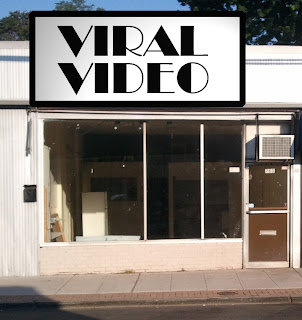 I made my way into the front of the video store, looked down and found out I got a package in the mail! I picked up the envelope and there was a note from Indie Horror Sci-Fi Filmmaker
Tom Berdinski. It said that the enclosed DVD is his latest upcoming release "Noirmageddon - A Mark Anvil Thriller"

Now my guess was Noir (As in Film Noir is a style of movie where the hero is always getting a room at the Dirt Motel and just about everybody in it has their own personal motives with the situation and or mystery.) And Mageddon being short for "Armageddon" is where there ain't a whole lot left of the world after whatever kicks it's ass and everybodie's that's on it. Adds together to make everything I just typed about. And I was right!!!

I popped it in the DVD player and was treated to all of the Shlock and Cheese that I frigging live for! "Nice way to describe it..." you say? Well "HELLS YEAH!" I say.

If you know anything about Tom Berdinski's body of work you know he loves to make movies that entertain and makes his audience laugh. Everything from "The Giant Rubber Monster Movie" to "The Italian Zombie Movie parts one and two" is a complete vacation from everything that annoys you reality and "Noirmageddon - A Mark Anvil Thriller" is no exception.

Tom spared no expense in keeping it fun and making it a virtual showcase of some well known Horror Host. And it was a blast not only seeing all of them, but catching in jokes from his first three features and blatantly plugging them as well (As we were all taught by dear old Uncle Lloyd!)

The movie delivered it's promised plot twist and turns being titled as Noir and brought the fire for the other half of it's title. And if that's not enough for you he had use of a sweet 1980 Corvette Stingray!

Now that I've given you all of the cool features of this... Feature, get out there and enjoy watching it when Tom releases it upon an unsuspecting public!

Copies of Noirmageddon are currently being sold at Horror Conventions and Thomas Berdinski has put my quote on the back of the DVD cover! 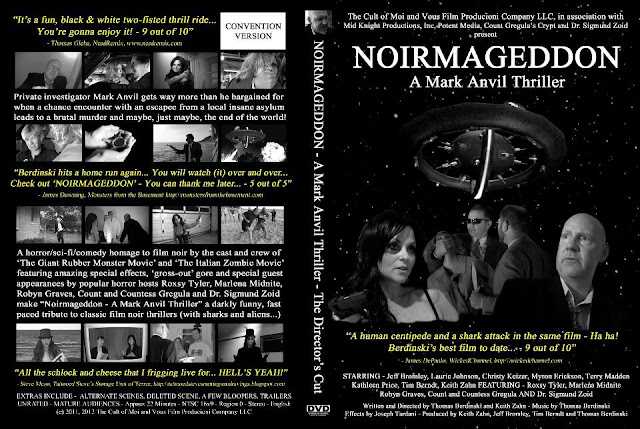 Posted by TattooedSteve at 8:13 PM