My review of "The Janitor" 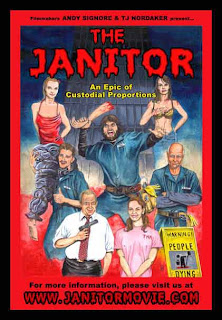 
This was the first movie I was asked to review ever!!!

The Janitor "Lionel" (Andy Signore) deals with his day to day as a custodian in an office building at Generico Corporation. Things like smarmy comments from office workers, abuse form technicians and living in the Cleaning Room would be allot to take. But at least he has his friend, co-worker and mentor "Mr. Grobow" played by Bruce Cronander by his side. And I guess killing about thirteen of these Cubicle dwellers helps keeps the stress level down too. 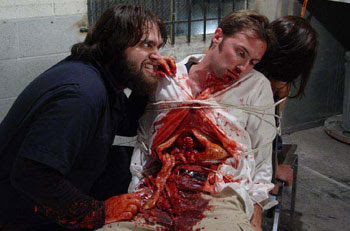 Lionel and Mr. Grobow had a great friendship until one day Lionel receives a job offer from the T N A Sorority at a local college after a woman he fell in love with named "Hillary" quit Generico after hearing about all of the murders. Andy tells Mr. Grobow about his new job and this breaks Mr. Grobows heart, because he thought they would be custodians at Generico forever.


Unknown to Lionel Mr. Grobow went behind his back during Lionel's two week notice and taken the job out from right underneath him. Lionel was devastated that Mr. Grobow could betray him like this and now he felt he was completely alone at Generico without his dream or his best friend.

Then Mr.Growbo's replacement a young man by the name of "Willis" becomes his new loyal friend and murdering accomplice in the revenge kill of The T N A Sorority and the final showdown with Mr. Grobow!!!

"The Janitor" is definitely in the vein of most TROMA style movies and you all know if it has a double helping of Schlock, Cheese and Fake Blood I am so there! The story line is strong, the movie doesn't take forever to get to the point and it's just fun.


TJ Nordaker had contacted me on Myspace nine years ago and asked if I would be interested in seeing it. 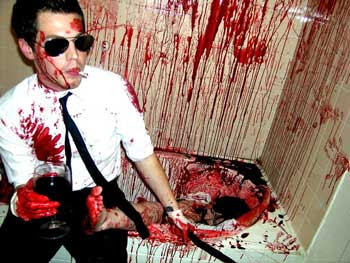 Just another day at the office for TJ Nordaker


Back then I was still running The Costume Shop, still in the entertainment game full time and helping other Indie Horror Productions get made.

The Costume Shop a great place because everybody came right there to network. I would have somebody walking in and saying "I need ten gallons of fake blood or six zombie costumes for  movie". Next thing you know we're talking production stuff and I would help that person get actors, costumes, locations, permits F/X tutorials or women willing to do frontal. 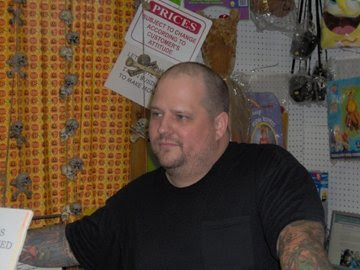 Little did I know other people were getting paid to do Networking!!!

I've dealt with TROMA from time to time too, so it was even funnier seeing Lloyd's cameo and finding out later that Lloyd taped that big old TROMA sign on the dumpster! That frigging poster he was using for a blanket was probably a TROMA movie one too!

When I watched it I automatically loved it. These guys had taken the teachings of Lloyd Kaufman himself like so many movie makers now and did it back then! And this was quite a few years after my own experience with a movie production. When Warren F. Disbrow had decided to make "Flesh Eaters From Outer Space".

When Warren had decided to make Flesh Eaters From Outer Space the movie industry was in a huge transition and distributors were only taking film masters. The ironic thing was the film masters were then being transferred to the Industrial Studio VHS that Warren was using and already had the master on! But the distributors want what they want.

The movie still made it to the cult status that it deserves after a great run in Europe. And then Lloyd found out about it while filming in Italy twenty years later, got in touch with Warren and gave "Flesh Eaters From Outer Space" and "Invasion For Flesh and Blood" American distribution through TROMA as a double feature DVD and an even lager following today.

Okay back to "The Janitor" I couldn't get over how Andy and TJ wrote a script, auditioned some actors, grabbed the equipment, shot the movie and distributed it like gangbusters.

After that they promoted at conventions where Costumers were really starting to turn it up to eleven. When Andy and TJ sent me pictures from the events I was really blown away with the way Costumers were simply making due with slightly modified Halloween Store costumes to figuring out Vacuforms, Sewing and all of the new latex's and silicone's. This was on top of utilizing Myspace to get the word out directly to horror fans.

Shortly after that these guys were winning all kids of much deserved awards for "The Janitor". And a whole new crop of opportunities and projects awaited them.


Good job guys glad to see you're still out there and going strong!!!
Posted by TattooedSteve at 4:58 PM